The Meme-ing of Life

We decided it was time to let you know a little about where we, the consortium, are in our lives right now. Some wacky little Proustian questionaires seemed the way to go. Enjoy! – Stephanie 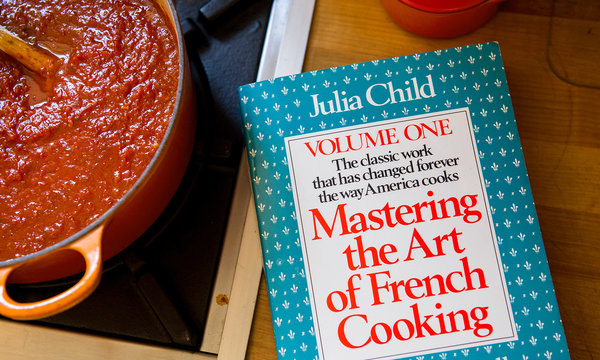 Cooking: Fall means football. My football playbook is more Julia Child than most, so coq au vin and boeuf bourguignon tend to be on the menu more than burgers and brats. If it’s ungodly hot, then grilling is almost necessary, but my great secret is that Costco in Franklin now has Prime steaks for Choice prices.

Cookbook: My local heroine Tammy Algood’s The Complete Southern Cookbook gets a lot of use in my kitchen. I’ve already mentioned Julia, but I’ve also been on a cooking from the ancient world kick lately, so Sally Grainger, John Edwards and Mark Grant’s redactions of ancient Roman cuisine have gotten plenty of attention. The food is actually lighter and easier to eat than the legends of excess would have you believe. I’ve spent a lot of money on pine nuts and weird spices lately though. Go-to faves still include Alton Brown and Claudia Roden.

Shopping: I haven’t truly hit my fall boot and coat shopping phase yet, but it’s coming. I’m sure there’s a coat from Sugaree’s in Murfreesboro to be had. My budget has been tighter than normal since I left my editor’s role at Nashville Lifestyles, but I have spent judiciously on new watercolors, vintage saris to cut up and make clothes out of, and a couple of wardrobe staples. Alabama Chanin’s Alabama Studio Sewing + Design (buy it here) is also at my disposal, so I can tweak my wardrobe using my sewing skills.

Do Lunch: I’ve just discovered Bella Nashville wood-fired pizza at the Nashville Farmers’ Market. The meat pizza is lush with Benton’s ham and fresh basil, plus truffle oil for me in place of mozzarella, since I sadly get monster migraines from milk and cheeses in quantity. The Biscuit Love food truck’s “Princess” hot chicken biscuit with stone ground mustard is my fast food of choice.

Evening Out: My husband and I live in Williamson County, south of Nashville, and the area is just acquiring the local restaurant population Nashville has long taken for granted. Jason McConnell is really taking it upon himself to change the culture though, and Red Pony is a favorite. We love his 55South across the street, had brunch there Sunday, and his newbie, Cork & Cow is pretty fabulous too. The Cool Springs iteration of local Italian Porta Via is also a favorite.

Gadget of the Moment: I’m not really a tech geek; that would be my husband. My newest toy is a SodaStream machine (Genesis model – but I don’t know if it has an invisible touch yet). I drink lots of club soda, and Seth is using it to make tonic for the g and t. I gotta admit, though, I’d like one of the new Samgung Galaxy Note II’s with the drawing capabilities.

Beverage: I’ve interviewed a million distillers of late. I’m so impressed with what Jeff and Jenny Pennington and Mike Williams are doing up at the Speakeasy campus on 44th Avenue North. If you haven’t tasted Collier & McKeel whiskey or Whisper Creek Tennessee Sipping Cream, do so. Corsair Artisan’s gin rocks my world.

On My TiVo: Titans and Saints football (I know, not the best season for either one). Alton Brown. Big Bang Theory. Game of Thrones. If I’m sewing, something I do a lot as a costumer, I’m usually watching Anthony Bourdain, Gordon Ramsay and guilty pleasures Ghosthunters and True Blood. Can’t wait for Downton Abbey.

On My Kindle: I just read David Anthony’s fabulous work on archaeology and linguistics, The Horse, The Wheel and Language. It soothed me after Gone Girl, which was terribly well written and my own definition of terrifying – a look at how human, petty and banal true evil really is. My favorite book so far this year is Erin Morgenstern’s The Night Circus, and I’m really excited about Tasha Alexander’s newest.

Culinary Fixation: Roman cookery, as mentioned above. Also bone marrow, cooked properly, after eating splendid takes on it at Frank Stitt’s Highlands Bar and Grill and Hot & Hot Fish Club, both in Birmingham.

Seasonal Produce: I hope the tomatoes last through November again, but it’s not looking good. Seth and I have Sunday morning BLT tradition, using local tomatoes and lettuce from the Franklin Farmers’ Market, the wheat mountain bread from Publix bakery and fresh basil from my herb garden. The shiitakes are starting to show up, and that’s made of win for me. this week I got gorgeous brocoli and the apples are pretty fantastic. I loves me an apple.

Road Trip: There are a lot planned for the fall, but I can’t wait to head up to Lexington, Kentucky in a few weeks and make bourbon trail stops. Woodford Reserve has one of the best tours you can take, by the way.

Mad Experiment: Simple syrups. I started on this last spring, trying to duplicate the honeysuckle martini I’d had at Hot & Hot Fish Club. The honeysuckle did well, and kept well, so I moved on to herbs, then fruits, then complex mixes and now I have half a dozen mason jars in the fridge at any given time. Seth’s beer has had to move to the second crisper drawer as a result.

Pop Culture Fascination: Still enjoying everyone’s pics from DragonCon in September (hey, nice job Forbes – what does that say about the power of nerd culture though?), which I missed this year. Currently planning my ChattaCon costumes for January. I am always and forever a geek girl.

Coveting: I’m a perfume-aholic. I actually wish I could be the New York Times fragrance critic. Hey, a good wine nose equals a good perfume nose, right? At the moment, clean is the rule of the day. Jo Malone’s latest, Blackberry and Bay, is heaven, crisp, tart and a faint underlying sweetness – more like the leaves of the blackberry plants in my yard after the berries are gone. Fall perfection (buy it here). Kiehl’s new Aromatic Blends really appeal too – I’m especially jonesin’ on the Fig Leaf & Sage (buy it here). Look at Demeter’s light Singular Scents if Jo Malone isn’t in your budget. I favor Dirt, Wet Garden and Thunderstorm (buy it here).